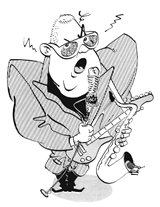 Gaz Gaskell is a Merseyside musician, entertainer, bandleader and solo entrepreneur
"What you see is what you get!"

2010: The BOSSA NOVA TRIO results from the addition of Jazz Union's double bass player PAUL McRAE to the previous duo, expanding its Jazz soloing capability at a stroke.

2012: 'Unveiled' on 22 December 2011 at Telford's Warehouse, Chester: BOSSA NOVA BOOGALOO - to further explore & intertwine grooves from Rio to New York to Havana, a five-piece merger of the Bossa Nova Trio & Boogaloo Brothers (N.B. which both continue to operate individually)